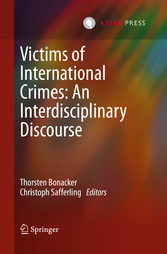 In international law victims' issues have gained more and more attention over the last decades. In particular in transitional justice processes the victim is being given high priority. It is to be seen in this context that the Rome Statute for the International Criminal Court foresees a rather excessive victim participation concept in criminal prosecution. In this volume issue is taken at first with the definition of victims, and secondly with the role of the victim as a witness and as a participant. Several chapters address this matter with a view to the International Criminal Court (ICC), the Extraordinary Chambers in the Courts of Cambodia (ECCC) and the Trial against Demjanjuk in Germany. In a third part the interests of the victims outside the criminal trial are being discussed. In the final part the role of civil society actors are being tackled. This volume thus gives an overview of the role of victims in transitional justice processes from an interdisciplinary angle, combining academic research and practical experience.