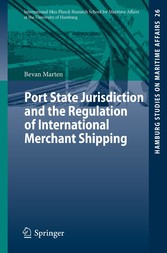 Port State Jurisdiction and the Regulation of International Merchant Shipping

Port State Jurisdiction and the Regulation of International Merchant Shipping

This book examines the concept of port state jurisdiction in the context of international maritime law. In particular the book focuses on situations where port states have used their jurisdiction over visiting foreign-flagged vessels to apply unilateral domestic law, as compared with the internationally-agreed standards enforced by regional port state control organisations. To illustrate the legal issues involved three recent pieces of legislation are analysed in detail: the United States' Cruise Vessel Security and Safety Act 2010, the EU's liability insurance directive of 2009, and Australia's Fair Work Act 2009. Key issues include the legality of port states' attempts to regulate aspects of a vessel's structure or equipment, or even certain activities that may take place before a vessel's arrival in port. The author argues that examples of unilateral measures being imposed by way of port state jurisdiction are growing, and that without active protests from flag states this concept will continue to expand in scope. As international law currently presents very few restrictions on the actions of ambitious port states, such developments may have a significant impact on the future of international maritime regulation.?