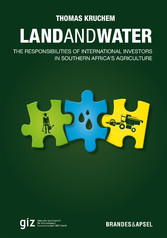 Our world has a problem. Malnutrition is on the rise again. After 30 years of regression, the tide turned in 2008. It's expected that by 2050 the planet will be supporting more than nine billion people, and nobody knows if they will have enough to eat. The most critical situation is in Africa, where in many places half the population is already starving. Ironically, the problem could be solved by just three countries. Between them Zambia, Mozambique and Tanzania have enough land and water to feed the whole continent. In reality 70 to 80 percent of their joint populations are agricultural smallholders who work themselves to death using methods that guarantee poverty. Agricultural land is used wrongly or not at all. Crops are just a fraction of what could be achieved with high-yield seeds, optimal fertilization and expert soil management. Slash and burn, excessive production of charcoal and hunting by means of fire harm the local environment and the climate. Why is this so? Can it be that in the 21st century, agricultural smallholders in southern Africa still don't have access to up-to-date know-how, strong support systems and modern markets? Is it possible that half a century of effort and billions of dollars of international development aid have made hardly any difference? In the face of growing pressure from their frustrated citizens, a number of African governments regard foreign investors as potential saviours of their agricultural industries. It's unfortunate that elsewhere in the world some of these investors have proved to be ruthless land grabbers and that quite a few have been spectacular failures. Have other investors learnt from this? Can they do something to mobilize the huge agricultural and irrigation potential of southern Africa? Can they work with smallholders as partners, give them new perspectives and help them foster food security? Do they promote or retard rural development?

Thomas Kruchem, born in 1954, is a well-known German journalist and freelance writer specialising in development issues. For many years his favourite region has been southern Africa. In 1986 he published a book on apartheid issues in South Africa, and in 2012 Orange-Senqu - Artery of Life on water issues. On four occasions Thomas Kruchem has won the renowned Media Award Developmental Policy of the German Federal Ministry for Economic Cooperation and Development. Kruchem and his family live in Mauer near Heidelberg in Germany.